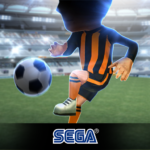 Pocket Club Manager makes its way west for the first time on mobile devices! The game was designed to be as close to the original as possible,
complete with the same cycle of club management, player training, finance management and football gameplay. Join other players around the world
on a unique journey to create the best football club ever!

Start off small and make it big! Become a football Boss who can manage a local club, compete against the strongest, and even stand at the top of the world!
Gameplay is quick and easy to learn, and players will grow naturally as your club gets bigger. Expand your clubhouse and stadium while conquering one league after another!

[Full utilization of the football match engine from the original series!]

– The engine used in past titles of the series has been revamped to provide even more fascinating play!

– Intervention during the game is unnecessary. Rather, player combinations and team tactics are the key to victory.

– Team strengths and weaknesses are easy to understand. Anyone can enjoy making a team and training players!

– Over 2,000 European League and Japanese National players appear under their actual names!

– Further, original players from the series have been included! Create your own, unique dream team!

[Includes an International Mode with data since 2002!]

– The International Mode from past entries in the series is back!

– Compete in huge International games every 4 years to become the world’s top Boss!

– The original series’ game cycle of “Negotiation, Management, Coaching and Command” is reborn!

– Act as a full-time supervisor to raise your club to its rightful place among the stars!

– Your player can be either male or female. Progress through the game, and you’ll even be able to create a team full of all your friends!

公益財団法人サッカー協会公認
————————————————-
[Version 2.1.0 Notes]
-A new League and new Cup have been added.
-You can now choose a Key Man for your team.
-The League Ranking Event was added.
-Entry into each SWCC Division is now restricted by team Overall Ability.
-Matchmaking and promotion / demotion conditions were adjusted in the Arena.
-You will now receive more Gold Coins when selling players that have undergone Limit Breaks.
-Identified issues were addressed.

Learn Alphabet For Everyone 1.0