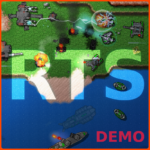 Play on the go against your friends on your phone or tablet.

—
Note: The demo version only includes a 2 campaign missions, 4 skirmish missions and has no multiplayer.
—