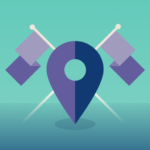 NEW! A fun, free motivation to run further! Capture local areas and compete against neighbours with every step you take. Build a formidable empire on the land you own and compare your might with neighbouring opponents. Explore, hire workers, deploy warriors and earn great fortunes to lead your people from the dawn of time to the Space Age.

“If you’re getting bored of your run-commute, try this” – Runner’s World

“Don a pair of sneakers and run (jog, or walk) to victory” – Engadget

“if you’re partial to a mobile game and want to ease your way into training more and logging your progress, this could be for you.” – Men’s Running

“Run An Empire’ fits into existing exercise routines, whilst giving new runners an incentive to get started” – Variety

► RUN (OR WALK) TO CONQUER
Whether walking to your workplace or running a marathon, capture the places you move through and bring them under the banner of your empire. See your activity transformed into a 3D heat map, as the places you visit most rise up like mountains from the ground.

► BUILD YOUR WAY TO GLORY
Start with a Stone Age hunting camp and progress through the ages from there – classical, medieval, renaissance and modern. Manage a civilisation from your doorstep, as you unlock farms, forges, factories and (eventually) a space port. Hire stone masons, priestesses and engineers to bring wealth to your empire – then invest your fortunes back in to even bigger rewards!

► COMPETE IN EPIC CASTLE BATTLES
Unlock a powerful new warrior with each new era of civilisation. Unleash your foot soldiers upon local castles and dominate friends and neighbours to be the ultimate conqueror. Show local opponents who’s boss by flying your unique customised banner design over the castles you hold.

► FEATURES
‣ Capture and own your street, your neighbourhood and your city as you travel on foot
‣ Run, jog or walk – perfect for beginners or experienced runners
‣ Build a vast settlement on the real-world lands you own – or capture new places you visit!
‣ Track and map every run from your pocket, using your phone’s GPS
‣ Upgrade your warriors and battle neighbours and friends to own nearby castles
‣ Record distance, calories, speed and see your performance improve
‣ Design your own customised banner to fly over your mighty empire
‣ Advance through the eras, from the Stone Age to the Space Age
‣ Pair with Strava and leave your phone at home!

► SUPPORT
Having problems? Contact us at ### and we will try our best to help.