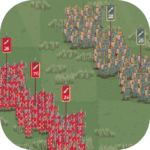 Take your an army and guide Rome to destroy barbarians ! Be a real Emperor!

Rome vs Barbarians : Strategy is a turn based tactical war game with simple controls and unique wargaming experience.
If you like history war games, you’ll definitely like this game too.
Swordsmans , spearmans and cavalery – Over 200 different friendly and enemy troops launch a fearsome battle onscreen !

• Use Skills and Cards •
Use the special skills of units to win every battle and lead Roman legions (S.P.Q.R.) to destroy barbarians army !
Using cards you can make your strategy more effective and your warriors stronger !

And finally, you can create your own huge fights(like battle simulator) or fight in the arena !

Update :
Local multiplayer mod .
Now you can play with a friend on same device !

Features:
• Simple control
• Turn based game
• Local multiplayer mod – you can play with a friend on same device
• Under your control the Army of the Roman Empire (S.P.Q.R.)
• Endless gameplay
• Destroy barbarians

Every day we make the game better!
New units !

Fixed performance. Now you can put much more units on the battlefield.