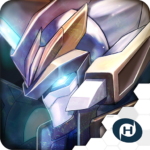 Robot Tactics 1st Anniversary Carnival, NEW EVENT, NEW PILOT, more and more attractive REWARDS will be given away in our anniversary event!! Login to get your rewards everyday now!

A hundred years ago, on Sunset Land, a war rose between the high-technology country of the United States of Honir and the magic country Paz Kings Union. The war rages on still today, stealing countless of lives and destroying the world as we know it.
A group of renowned mercenaries banded together and created the “Vera Association” in order to restore the balance. In Robot Tactics, players will become a part of the Vera Association and complete missions in the quest for peace.
Robot Tactics is a JRPG that combines turn-based battles and card game elements. It’s a perfect combination of RPG action, a brave story, mecha designs, item collection and social interaction with unique turn-based strategy battles. Players will feel immersed in the game thanks to the incredible battle mode and its strategy mechanics. The highly customizable robot system is just one of its many exclusive features.
Besides fighting for peace, meeting new characters and unveiling their stories, players will be able to interact with other players from all over the world in PVP, cooperation tasks and full-scale server battles.

√ New Shard System
Collect shards and synthesize mecha for free, it is now easier than ever!