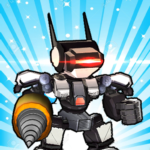 Robot Battle Arena : Build And Destroy is a multiplayer PVP game where you design and construct your own remote-controlled armed and armored machines to fight against another player’s robot in an arena combat championship.

In this world, robot battles are popular form of entertainment and people would build robots to compete with each other to see who is the strongest builder and fighter. During a match, two robots do their best to destroy each other using whatever means available. Your ultimate goal is to become the Champion of the battle arena by competing with other players and move up the ranks. Be the best build fighter as fame and glory awaits you!

Game Features:
– Build and destroy another robot built by other players in this PVP multiplayer game
– Climb up the championship ranks and be the champion of the battle arena!
– Join forces with another player and fight 2v2 in tag team mode
– Be a master engineer: design, construct, upgrade, and improve the ultimate battle robot
– Unlock crazy weapons from saws and katana to lightsaber and much more
– Equip robot with AI chips to fight with various movesets in the battle arena
– Stunning high quality 3D graphics and dynamic physics system
Added internet connection checking screen
Fix tablet loading screen and tutorial bug