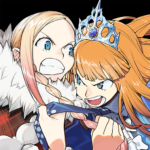 You’ve got one chance. Use it!
3 minutes of real-time strategy.

■Basic Rules
Form a deck with 8 cards, use Heroes to destroy the opponent’s Towers within 3 minutes.

■League Matches
Try to be the best in thrilling real-time battles against players from around the world!

■Skills
Use skills to tilt the scales!
They make all the difference when used at the right moment.

■Characters
Characters from classic stories come to life as Heroes, funkier and more awesome than ever seen before!

For example…
Red Riding Hood, a girl with an eye for fashion and social media.
Cinderella, a freewheeling pop star who loves motorcycles.
Sinbad, an adventurer who will do whatever it takes for treasure!

BGM during battle can now be selected!
Change BGM from the settings!

Exchange function added to the Shop!
Extra cards sent to the Gifts box can be exchanged for Gold Bookmarks!
An Exchange where you may exchange Gold Bookmarks for items will be added!