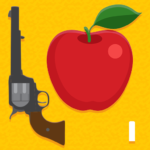 Red Apple Shooter, the #1 addictive apple shooting game of the year. Use your revolver and shoot your bullets at the moving apples. Fun, easy to learn, hard to master. ?

? Cool cowboy shooting game, very addicting
? Catchy spaghetti western soundtrack to enjoy while shooting
? Simple tapping controls. Just tap to shoot the apples
? Small installation, only 7.5 MB (fits in the under 25 MB category)
? Uses only low storage and low memory space on you phone or tablet
? No WiFi? No Problem. You can play without internet. What are you waiting for?
? FREE, doesn’t have in-app purchases

⭐ Western cowboys consider this cartoon apple shooter game the best game of the whole wild west ! It’s the hyper casual shooting game, suitable for kids of 2, 3, 4, and 5 years old and even older. It’s a free game for little girls and boys that also adults like to play. Shoot the apple target. Shooting games with a gun is for boys, girls, men and women. Apple games fruits are fun for when you are bored.

⭐ A true cowboy doesn’t have any redemption when shooting the cartoon red apples dead. All he wants is to join the Pistol Power Apple Practice Club (p p a p) and have true grit. No pineapple or pen needed, just a plain old gun, an apple and good shooting skills. Pew, pew!

⭐ Are you the best shooter of the wild frontier? A fast outlaw gunslinger? Or just city folk from Dallas? Don’t cheat and take your best shot with your six shooter. Pull the trigger and make the coyotes howl, yeehaw!