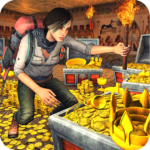 Is it true that the mummy takes revenge upon every pyramid raider? Start the magnificent time travel adventure and become the archaeologist hero who returns to the age of pyramids. Play Raider’s Mystery of Hidden Object in Egyptian Tomb games for free offline, find items in tombs and reveal the secret of the king of Egypt. Enter the hidden world of the ancient egyptian pyramids and explore the historic tombs filled with mystery and Egyptian hidden objects. Interact in mysterious tombs designed to the finest detail and solve puzzles to unmask the secrets of the Tombs. Roam the secret passages and creepy rooms of the ancient pyramid and palace, collect mystery items and escape the haunted city and the horrible king Tut curse in hidden object treasure hunt games free.
Now start the hunt for the treasure, unveil the mysteries of the past and seek and find hidden objects in this game to reveal the secrets buried in pyramid! Download “Raider’s Mystery of Hidden Object in Egyptian Tomb Games” for free and start the journey to the mysterious realm of Anubis, Isis, Amun Ra and other ancient Egyptian gods and goddesses. Explore the wonders of the Egyptian civilization and escape all the haunted rooms in one of the most amazing “archaeologist games”. Discover ancient Egypt artifacts inside the pyramids in the unsealed king Tut’s tomb! Decipher magic symbols and hieroglyphics on sarcophagus to “find the hidden things” and escape the room and king Tutankhamun curse. Get one of the best hidden object games 2019 and start “searching hidden things” and “pharaoh cursed treasure” and revealing mysteries of Egypt!

Book your spot in Egyptian history and discover what the historic dead have left for the afterlife. Unravel complex puzzles as you explore tombs never known to mankind. Clear the air from doubt as you reveal the secrets that the great Pharaohs took to their graves. If you like adventure games then you’ll have an absolute treat awaiting for your with the mystery game as it offers traditional adventure like puzzle game-play mixed with the latest 3d reality experience.
– Improved Game Play.
– Improved Game Graphics.
– Fixed the minor issues.