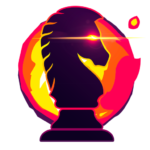 The Pulsar Chess Engine plays Chess, with difficulty levels, and five variants of chess that are Crazyhouse, Atomic Chess, Loser’s Chess, Giveaway(also known as Suicide Chess – goal is to lose your pieces) and Three Checks. I originally developed it as as a chess engine or program and over time taught it to play the variants as well. In chess it values mobility and open play more than closed positions. At variants, each has it’s own style.

Pulsar includes levels for all its games and the rules of Chess and each variant are included as well. It’s add free. It defaults to chess at Easy(which is about 1200 rating so not entirely novice) if the users just starts playing, otherwise go to the game button and choose new game to configure a more specific game. Last game type played is saved on restart of the app. There are some choices for board colors and chess pieces as well as the apps background color. This is the same Pulsar chess program that I started for computers beginning in 1998.

Pulsar started as a chess program and over time learned variants. It remains an interesting chess only program if the users it not interested in variants and I tend to just play chess. I ran it extensively on two chess servers testing the app against strong players and also testing how to handicap it on handicapped computer bots. The ratings that appear on the board when selecting from the first 8 difficulty levels are estimates based on what I saw running it at various strengths.

Pulsar does not read game files but it does save all games in a PGN game format. There’s an option on the game menu to manage the log file and export it out as an email attachment or delete it, preferably only after exporting but up to the user. After a game finishes, the user can also just mail their last game.

On game / new game if play vs the computer is unchecked the user can play in two person mode which I’ve found useful when I have a device and want to play a chess game but no chess board with another person who is present.

The Atomic Chess variant in Pulsar follows ICC rules and has no concept of check and king can castle in check. In Crazyhouse the user can use a turn to drop on board any of the pieces they have captured and the piece palette with the drop pieces appears to right of board. So if you try to the app to play chess(main thing I play) or Crazyhouse or play Atomic or any of the other chess variants like Loser’s Chess, enjoy the app and the game play and feel free to let us know what you think if you want. We are new to Android but have been on another mobile OS and the Android version should be a fairly exact copy of the other app with some improvements.