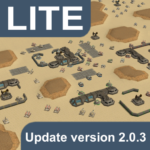 My friends.Thanks to everyone who downloaded my project and put five stars. I believe that my time was not used in vain.

Project RTS – is a classic real-time strategy in which you have to extract resources and explore planets of an unknown star system found on the outskirts of galaxy. In fact production you will interfere with other corporations, groups, races and guilds, which have their own interests in this star system.

Advices & Tips:
For capture oil pumpjack place near to it youre combat units and destroy all enemy units near it. After all, if a number of enemies, what kind of production resources can be discussed.
At your disposal a many types of units: tanks, lasers, rocket launchers, stationary guns. The plant will allow you to build additional equipment, the main thing is not to spend more than you need, because for the passage of each mission you need to collect a certain amount of resources for a limited time. Also, use the advantages of the landscape, it’s not hard to be a combat unit, the further it can fire. Don’t leave your oil pumpjacks unattended the enemy is insidious and won’t miss the opportunity to capture them. Resources can also be extracted from the ground if you use harvesters. Harvester filters the sand saturated with carbon and metals (the black patches on sand), after which payload mass is delivered to the base, and player gets points. For speed up / slow down game use the button in the upper left corner. The button in the upper right corner opens a dialog with a reminder of the mission purpose. The dashes in the upper right corner show the current number of oil rigs you have captured.

* Sorry, FULL version of game not available now in market.

Note: If game works not stable after update, try restart it or reinstall it (but saves is be missed). Please relaunch game, after auto updates if it work not stable.

Maps of All Countries in the World: Geography Quiz