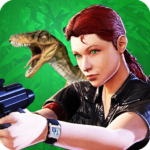 Intense 3v3 team combat from the prehistoric era! Battle friends, and make new enemies in Primal Carnage Assault, the first MOBA that lets you play as both dinos and humans. Mix up the teams and try out all 6 unique soldier classes. Armored dinosaurs and agile humans work together with melee and ranged weapon attacks to take out the enemy base. Many of your favorite dinosaurs from the Jurassic and Cretaceous periods.

Win matches to get promoted to new Tiers, unlocking rewards and new killstreaks along the way. Power-up your killstreaks by eliminating enemies then launch spy drones and surface to air missiles, or the devastating B2 Bomber. Use your killstreak at just the right moment, or in tandem with a team-mate to clear objectives on your way to the enemy base.

2. Extreme Squad based combat
Team up with Friends or create a mini-squad by finding pets on the battlefield to join your attacks. Your pets with increase your defense and attack ability as you scout the map and attack the enemy base.

3. Killstreaks to spy and destroy
Drones for spying, missiles to shoot down drones, bombers to destroy enemies and objectives. Collect the killstreaks as you Tier up and enable the killstreak as you eliminate your targets. Strategize with your Squad on what killstreaks to bring into the battle, and synchronize your attacks.

4. Capture the mighty T-Rex
Unleash the ultimate battle weapon by capturing the T-Rex and following him to the enemy base.

5. SQUAD UP!
Invite your friends to join you in battle, or make new friends from recent games.

6. Control Assist
Auto-targeting and auto-attack help you quickly lock-on to the enemies. Ability upgrades in battle and skill shots let you show off your unique combat style. Play strategic, or play aggressive and tune how your pets respond in battle by using the targeting controls in Settings.

Primal Carnage Assault is a free to play game and there are ample opportunities to earn items by battling, finishing Missions, and visiting daily. Items are also available for real money purchases so plan and play wisely.