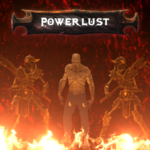 During your studies as an Apprentice at the University of Magic, you’ve stumbled upon a powerful stone that greatly increased your magical powers. Blazing through the semester with ease, you’ve discovered a deep, insatiable hunger inside of you. Knowing that slaying the dark creatures in the ancient crypt nearby will make you even stronger, you’ve decided to use your newly found powers to satiate your lust for power.

Powerlust is an action rpg roguelike with dark and creepy atmosphere.

This game is under ACTIVE DEVELOPMENT, I have many updates planned for it.
I’d appreciate any feedback, it will be a really huge help in further development.
Check out my twitter for constant updates.
It’s completely free, no ads.