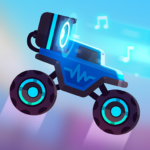 Welcome to the arena!
Pick the best machine and fight in 1vs1 fast battles. Use physics to win and control the fight by jumping and shooting your opponents to death with various weapons.

CRAZY WEAPONS
A dozen power machines to choose from. Lasers, bombs, miniguns and shields – upgrade your ride with deadly weapons and dominate the fight!

FUN PHYSICS
Jump to avoid bullets, rotate in the air, land behind your opponent and strike them down!

RANKED LEAGUES
Compete in leaderboards against players all over the world to be on top and promote to higher leagues. Increase your rank to unlock new machines and rewards!
Compete to be on top of ranked league leaderboards
• New matchmaking system based on machines rank!
• Win gold to compete in Leagues!
• Unlock cars by rising your Reputation Level
• Become the League Champion to get cool rewards!