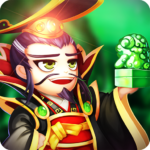 * THE MOST FUNNY COMMUNITY
– Chat, play, and fight with your friends in main city.
– Let your character roam the main city and do some quests.