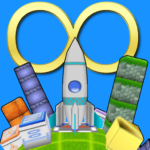 Size of the territory is approximately ∞ (infinite).
Challenge yourself to make a vast city as large as your smartphone/tablet allows!

Develop a planet with a landed spacecraft in the center!

▼Produce a robot and dig through the planet!
The land you cultivate is your territory.

▼Sometimes monsters appear!
Monsters aiming for your spacecraft will attack!
Deploy a defense team and protect your city.

・Supports both vertical and horizontal screen views. Game play can be carried out in both styles.
・All drawings are full 3D models. Enlargement and reduction of the screen, as well as point of view changes can be done as you please.
・By customizing game settings, it is possible to play even on smartphones with relatively low specifications.
・Also fully compatible with tablets. It has been optimized for Tablet UI.
・You can use rankings and achievements by using Google Play Games.
・Screen size 18:9(2:1), 18.5:9 also supports.

1. Let’s expand the territory
The surroundings of a spaceship are surrounded by “blocks”. Let’s place the “drilling unit” and excavate the block and enlarge the territory. Blocks and units have color correspondence, and you can excavate blocks of the same color as the unit.

2. Let’s collect resources
There are some types of resources that become energy sources, those that become materials for units, and others that are materials for production.
By placing units near ‘deposit’, the robot will start collecting resources. The deposit emerges from the golden block.

3. Let’s build a city
Continuing the excavation of the block, the material that makes the robot should come short. Let’s build a city. You can produce robot parts at city factories.
Let’s first make a basic road. This can be created by converting the “transmission unit”. Let’s make residences and factories from “drilling unit”.
If you connect the residence and the factory on the road, a minimum city will be completed. If you supply electricity to the road, the population will increase and production will start at the factory.

5. Do not forget the defense of the city
Monsters will emerge from anywhere and will aim for player ‘s spaceship. Let’s defend the city by placing a “defense unit”.
As the game progresses, monsters also power up and attack. Let’s start production at a factory in the city so that ammunition will not be interrupted.

6. Let’s destroy monster gates
If you destroy the monster gate you can call another spaceship. Destruction of the monster gate is an opportunity to further expand the city.
Enemies will appear indefinitely from the opened monster gates. Let’s fight if you have enough money and ammunition.

7. Let’s make specialized cities
In “Normal city”, the limit of growth of the city should come to be seen. Let’s create a “specialized city” as the next step. Specialized cities are “industrial city” consisting only of factories, “agricultural city” only of agriculture, “commercial city” of commercial facilities only. Bonus is given to each production, and furthermore, dedicated city units can be arranged.

-Direction in which resources emerge-

The indicator of the color direction of the block also has the ability to indicate what the golden block changes.

Turn Down For What Button