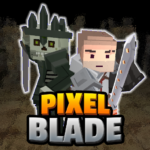 You are the last pixel hero in PIXEL WORLD.

Let’s collect the weapons by hunting monsters in the dungeon

# This game that dont need wifi and play offline without internet.

This version of the game is not a demo. it is a full edition
-bug fix