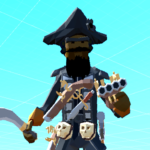 The town of Marhem. Once a pirate dominated port town, located deep in unchartered waters. For years, the pirate inhabitants used this island as a base of operations, under a single pirate king. The pirate crews struck relentlessly, plundering and destroying entire merchant fleets. The pirate menace seemed unquellable. The great empires did not have sufficient war vessels to deal with the vast amount of raids.

Strangely, the attacks declined in frequency, and ceased all together. The Empires’ dispatched Intelligence gatherers reported most horrific findings. The entire town had been abandoned, & the majority of it’s inhabitants, slaughtered and raised as undead skeletal beings.

The pirate crew survivors pleaded for clemency, willingly surrendering to patroling empire war vessels. The former pirate king, in exchange for a full-pardon, revealed the details that led to this madness…

-The empire has a keen eye towards securing and rebuilding the town of Marhem. They have appointed you, the new governor, to secure their interests in this accursed colony.

-Hire troops to defend your town! From Militiamen, to Vanguard Raiders, to Swivel Gunners, to Royal Imperial Troops, a whole gamut of defenders.

-Provide your troops with naval fire-support from your flagship! From your humble starting 6-Gun Sloop to the massive 60-Gun Juggernaut.

-Purchase shares from merchant ships for extra dividend income, or as investments.

-Hire treasure hunters to seek out lost treasure, scattered across the island.

-New Ability, Rapid Fire
-Tip of the Day
-Just short of a little gold? Check out the Trading post!