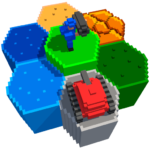 Petit Wars is a turn based strategy simulation game where you command the tactical units such as infantry and tanks to fight enemy forces.

Features:
– Classical turn based strategy simulation game.
– A Hex map with difference of elevation.
– 11 types of ground units, 8 types of air units, 6 types of naval units.
– The battlefield where the four sides of the Blue army, the Orange army, the Yellow army and the Green army compete.
– All 25 maps are free to play.
– A player could play against an AI opponent.
– Voxel style 3D graphics.
– Both support for portrait and landscape screen.