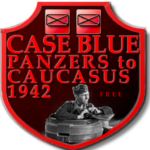 This is a free 20-turn-version of Panzers to Leningrad, a strategy game which takes place on northern sector of WWII Eastern Front in 1941 when Germans launch Operation Barbarossa. You are in command of the German Army Group North , tasked with striking through the Baltic states all the way to Leningrad, the cradle of Bolshevism. It is essential for German Panzer Corps to seize Leningrad quickly, before Wehrmacht offensive is inevitably slowed down by the steady flow of Red Army reinforcements, worsening weather, logistics of fuel supply (can be turned off), and terrain filled with forests and swamps.

+ Thanks to in-built variation and the game’s smart AI technology, each game provides a unique war gaming experience.

+ Competitive: Measure your strategy game skills against others fighting for the Hall of Fame top spots.

+ Good AI: Instead of just attacking on direct line towards the target, the AI opponent balances between strategic goals and smaller tasks like encircling nearby units.

In order to be a victorious general, you must learn to coordinate your attacks in two ways. First, as adjacent units give support to an attacking unit, keep your units in groups in order to gain local superiority. Secondly, it is rarely the best idea to use brute force when it is possible to encircle the enemy and cut off its supply lines instead.

The full game is also available.

Conflict-Series by Joni Nuutinen has offered highly rated Android-only strategy board games since 2011, and even the first scenarios are still actively updated. The campaigns are based on the time-tested gaming mechanics TBS (turn-based strategy) enthusiasts are familiar with from both the classic PC war games and legendary tabletop board games. I want to thank the fans for all the well thought-out suggestions over the years which have allowed these campaigns to improve at a much higher rate than what any solo indie developer could dream of. If you have feedback about this board game series please use email, this way we can have a constructive back and forth chat without the limits of the store’s comment system. In addition, because I have huge number of projects on multiple stores, it’s just not sensible to spend handful of hours each day going through hundreds of pages spread all over the Internet to see if there is a question somewhere — just send me an email and I will get back to you. Thanks for understanding!
v1.6.6
+ Setting: Show minimap during AI movement phase ON/OFF
+ Setting: Minimap includes railway-road network in black color
+ Removed Google Support Library: Smaller app size but dialogs might look different
+ HOF cleared from the oldest scores

v1.6.4
+ Setting: Size option for Movement Arrows
+ Yes-No confirmation dialog on Disband action
+ Road only gives cheaper move when moving from own hexagon to own hexagon (not to enemy hexagon, not battle)