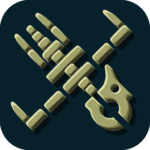 The red storm is approaching our kingdom, and the devastating cruel war, which the world itself has yet ever seen before is coming. Numerous troops of red invaders advance in the north, in the east, in the south, and in the west. But despite the overwhelming superiority of the enemy forces all over the fronts, the unshakable faith in our final victory brings us to fight. Relying on the gun power of your small blue tank, you will have to lead the defense of every fortress of our kingdom and never retreat before the red threat, as the enemy will strike with a power of artillery, bombardments, rocket launches, parachute landings, and hundreds of armored vehicles to defeat us.

Rise of Kingdoms - The Companion (Donate)