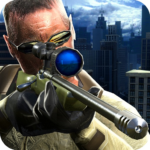 With Paid To Kill you get to take down some of the city’s worst criminals. You also get to run over zombies in your car!

Paid To Kill is exactly what the name says.

There has been a new drug to hit the streets and it popularity is skyrocketing. However there is a side effect to this new drug. It turns people into zombies!

The city’s mayor wants to take care of this problem as quietly as possible.

He has hired you to take back his city from the criminals and zombies.

At night things get worse….

When the sun goes down the criminals go into hiding and the zombies come out.

During the night you will need to run support missions to help get supplies back to the city. You will be provided a car to drive down the street to hit and kill as many zombies as possible. For each zombie that you run over with your car you will be paid by the mayor. Once you reach your destination you will need to use your sniper rifle to shoot and kill the zombies that are not letting the supplies get back to the city.

You need to quietly kill as many criminals and zombies as you can!

Are you ready to take back the city? Are you up to the challenge?

With Paid To Kill you get

Just so you know

This is not some random average sniper game. This is an exciting and action packed sniper game. You have to find the criminals in the crowd and shoot only the right ones at the right time! You have to be tactical and strategic in who you shoot with your sniper rifle.

So download Paid To Kill today and start getting paid to take back the city!

You can play Paid To Kill on your phone or tablet.

There are leaderboards so that you can see who has killed and earned the most money!

Paid To Kill is rated 17+ and contains mature content with frequent and intense violence. So we recommend that you keep this away from younger kids.
Bug Fixes and New Features.