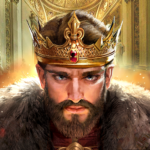 Who will come to dominate the landscape of medieval Europe?

The imperial throne is waiting for you! Don’t delay, fight for glory! You can establish kingship, wed your heirs into other royal families, raise the heir to your crown and build the greatest empire ever!

Come to Origins of an Empire to build your own army and experience the life of kings! You will have brave knights at your service, emerge the victor in epic battles, and become the greatest king in history! You can wed your heirs to other royal families, or marry with a variety of beautiful women and raise heirs to your throne! Command your army, build the most powerful dynasty on the European continent, and lead your empire into a golden age!

Employ strategy and heroism to defend the glory of your dynasty! Summoning global allies to crush your enemies, destroy dark forces of subversion in your empire, build a powerful kingship, and write a legend that belongs to you and your allies! The rise or fall of an ancient empire will be decided by your actions!

☆Experience the life of a king☆
Decisive victory in battle will make you a glorious king! You can marry beautiful maidens from different countries while defeating your enemies! By carefully raising your heirs, training elite armies, building a great castle fortress, conquering your enemies and establishing a supreme empire, you will become a monarch for the ages!

☆Marry beautiful women from all over the known world☆
Whether it is a peasant or a noble princess, you can bring them into your castle as long as you are victorious in battle! Strategic marriages among other royal families can enhance the power of your armies. Win battles and bring beautiful women to your court!

☆Raise your heirs☆
The glory of a dynasty must be inherited, which means you will have to raise worthy heirs. Bring up the heirs to your throne and increase the prestige of your empire! The glory of an empire demands the protection of you and your heirs!

☆Build your castle and defend your kingdom☆
War is constantly destroying the territory of the kingdom. Training armies, building a mighty castle with walls of steel, calling on valiant allies, joining in epic battles, crushing your enemies, what are you waiting for!?

☆Seize glory for your allies and forge an unbreakable alliance!☆
Build a strong alliance with players around the world! Use voice and global chat to communicate and fight with your global allies in real time, strategically destroy your enemies, and defend the dignity and glory of the Empire!

Come to Origins of an Empire to begin the ultimate battle for supremacy, forging your path to royal glory! Build your own legendary empire!