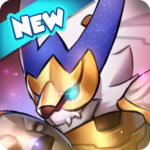 Join the war & fight in an epic clash of 3 factions – Humans, Demons and Phantoms! Chaos has descended upon the kingdom as these factions wage war to be the one and only ruler of the realm!
Choose your race, build your army and train them to become the best fighting force in the kingdom. Siege your opponent’s towers and destroy them to win the game in real-time multiplayer battles. Play in action packed 2vs2 multiplayer tower defence battles against players from all over the world!
Develop your own unique strategy to outsmart your opponents and win the TD battle. Units have special abilities you can use to turn the tide of war and gain an advantage over other players. Kitty Ninja performs a deadly stealth attack, while the Phoenix resurrects from death. Discover each unit’s special ability, build your army and decide which strategy to play!
Every player you fight in the arena will use their own army, with different strengths and weaknesses, so you may have to adapt your strategy in the middle of a clash to defeat your enemy towers and win!

OMEGA FORCE: 3 FACTIONS WAR – HIGHLIGHTS
– Choose between 3 factions – Humans, Demons and Phantoms
– Engage in real time tower battles against players around the world
– Action packed 1vs1 TD tower clash wars
– Play with team mates in epic 2vs2 wars. More people, more mayhem!
– Build & train your army of fighters using a huge range of units
– Develop your own combat strategies for attack and defence
– Each unit has their own special ability to use
– Combine 2 battle units to unlock their true power
You have been summoned by your king to fight in the Omega Force Clash Arena. The fate of the kingdom depends on your success. Which faction will you join?. Who will rule the kingdom?
CHOOSE YOUR FACTION. JOIN THE WAR TODAY!