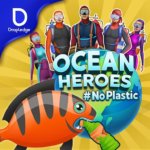 Ocean Heroes: Make Ocean Plastic Free – Play one of the most popular games with 5 mighty ocean heroes to reduce plastic from our oceans, for real!

Save Fishes, Turtles, Dolphins, and Endangered Animals while killing time!
Be on top of the Google Play Games Leaderboard by collecting plastic pollutants & saving fishes.
And yes, do this before getting attacked by Puffer Fish, Lion Fish, Mysterious Sea Creatures or getting eaten by the Hungry Sharks!

Choose Ocean Heroes To :
1. Be The Change to Save the Oceans. Play and collect as many Dropledge Credits.
2. Take Pledges & Create Actions for real to Stop Plastic disaster that’s plaguing the planet.
3. Come Forward. Participate in or support through your contributions.

Why is it Now or Never:
As per recent reports – Humans have made 8.3 billion tons of garbage since 1950. Which means –
• Enough garbage is thrown away each year to circle the earth four times.
• It’s killing more than 1 million marine species annually. More than one million bags being used every minute.
• Plastic pollution has reached such shocking levels that the Human Body is now absorbing chemicals, causing harmful human health effects.
Think about it… Do we and the planet deserve this? It’s Time we Act… NOW. Pledge to Stop Pollution.

Who is behind this app:
This game app is created by Dropledge – A Social Cause Based Technology Initiative and supported by Non-Governmental Organization(NGO) such as SagarShakti
It is a platform that creates a positive impact on issues in society as well as environmental issues without making it preachy, yet triggering the subconscious- to enable actions for real.