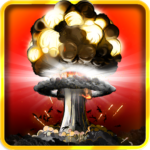 Your mission is to destroy Everything scattered across the landscape! Kill everyone on the TOP SECRET hit-list, which is updated month to month! Drop Nukes to wipeout a larger area and become an accurate bomber to kill and cross off people on your most wanted list! You can also rescue some VIP commandos scattered across the desert…

STRATEGIC DECISIONS ★
Know when to use the right weapons for the task at hand! Use Army and Special forces to collect ammo

ENEMY HITLIST ★
Find and hunt down your enemies in the desert, industrial zones, cities, wastelands and no mans land… Use the battlefield to test new weapons, assault and eliminate your enemies! Turn the desert into a nuclear winter! No survivors happy hunting!

Bombs, Nukes need to be armed before you can drop them…
Destroy Cities for high kill numbers, Get Credits from the government to order more weapons, super weapons, space weapons and supplies for your atomic bomber, enjoy huge explosions and inferno fireballs from nuclear tests!

THE RESISTANCE ★
Be careful – you are not invincible on the battlefield! There are airfields, ww1, ww2 tanks, AA anti-aircraft guns, Drones, helicopters, ICBM missiles and other military units and targets that wanna blow you out of the sky! Earn Medals and Awards!