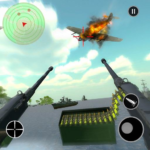 “Battle in the classic war zone of WW2 has brought new mission for our ballistic submarine in this Navy Battleship Survival War game. This mission is about guarding the naval base and responding to the aerial attack by the enemies.

This time, enemy has sent its navy battleship and air striker jet fighter planes to sink down our hunter-killer submarine. Protect the sub and our surface combatant and strike back with ballistic missiles, cruise missiles and torpedo missiles. Our sea territory is secured by naval mines, battleships with guided missiles, large caliber guns and fleet of Aircrafts carriers. Time has arrived to counter attack to break the survival war through well-equipped, most powerful and long distant targeted missiles launcher guns.

It’s a battle for Command of the Sea . Multipurpose submarines of Soviet Union is approaching our dockyard with stealth warfare weapons with 20 nautical miles speed. It is accompanied with vessels and gunboats with missiles onboard. Locate the sub and sink it down.

Open up in the extreme challenging location in middle of an ocean having storm and rain, fight enemy’s aircraft approaching to attack our submarine. The only strategy works is strike back to get saved. You have got navy battleships, twin anti-aircraft machine guns having capability of ground to air strike and land attack submarines . One and after increasingly forceful deadly attacks will challenge your existence at the vary place of naval submarine. Make them fall in a rapid fire shooting rage rise up in sea waves!