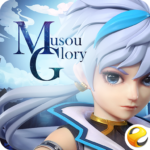 “Musou Glory” is a MMOARPG mobile game, a perfect blend of classic role-playing and the new open world gameplay, which create a massive storyline, expressed with visually stunning graphic! Brave the world with alliance, or even meet the love of your life in the world of “Musou Glory”!

– Epic Dungeon Crawling Gameplay
The game development team has carefully collected the opinions from world renowned game reviewers and thousands of gamers. They have worked hard to craft the dungeon crawling system which specialized in the multiplayer element. The overall game design is an all-rounded one, where hardcore gamers, as well as casual players will find a perfect gaming style that suits them!

– Intriguing PvE and PvP systems
The game consists of numerous PvE and PvP gameplay such as brawl, team battle, clan war, arena, and many more. Be a lone wolf, or a team player while playing the game. Battle freely, anytime, anywhere!