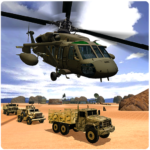 Mount Helicopter Combat 3D is a helicopter warfare and gunship battle themed flight simulator and shooting game, different from any other flight simulator as it puts you in the seat of not the gunship helicopter pilot, but the sniper shooter and machine gun operator targeting the enemy soldiers!
Welcome to the battlefield in this amazing FPS game (First Person Shooter) that takes you to a modern combat scenario where your army bus, army trucks and army tanks are on the move in a convoy and enemy infantry troops are gathering, with their weapons loaded, to intercept your army transport and take out every army vehicle in the convoy. You are the only aerial support the convoy has and you have to come in and defend your army transport convoy, aboard your helicopter gunship with your guns blazing and leaving no one alive!
Mount Helicopter Combat 3D is an amazing addition to your collection of flight control simulation, navy gunship helicopter shooter, battleship combats, helicopter warfare, tank war, warship, sniper shooter and army helicopter shooter games as well as the FPS games, that takes you directly into a modern combat and navy gunship battle being fought to protect your army bus convoy. The enemy is soon to come in with a tank attack on your convoy so be hasty in taking out all your enemy infantry units before they target your military drivers or before the tank fleet comes in!
The war has gone out of bounds. Starting as a minor border feud when an enemy military driver crossed the lines, it has led to the current tank wars, gunship battles, battleship combats and the fear of nuclear warfare is in the air. You are the sniper elite and protecting this convoy is your key to end this long prevailing helicopter warfare!
Download Mount Helicopter Combat 3D now and play the best helicopter simulator and shooting game in the store!
Key Features:
– Take your place in the weapons seat instead of just flying a gunship around
– Waves of enemy troops
– Hidden enemies in the mounts
– Superb controls with amazing response
– Incredible desert environment
– Marvelous 3D graphic content
Minor Bugs Fixed