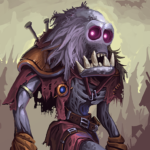 Moonshades is a dungeon crawler role-playing game developed for the Android platform, to restore the immersive atmosphere and experience of the old-school RPG’s.

Recall the fun of the genuine games inspired by D&D – embedded in 3D surroundings with a deep, captivating story. Discover an enigmatic realm loaded with ancient magic and myths – grand legends are reborn as you venture into the epic journey!

The conquer’s tale leads you beneath the ruined towns – toward grim, eerie dungeons and nesting monsters in the ghostly light. Some descendants of Harten still resist with all their might, enshrining the secrets of the ancestors’ magic. Join the mission to bring the liberty and the radiant, lost wisdom back for these rich and mystic lands! The Crown’s glory and treasures are buried, many kingdoms of darkness has invaded the realm, but the hope for changing the threads of the history has not been forlorn in the deepness of the dungeons. Finally, the reward for your efforts will be fabulous!

Essences of the Moonshades RPG:

– Mythic beasts and other fantasy creatures come to life in a massive, cryptic dungeon environment.
– Armour yourself for the battles, and find your best strategy to attack their enemies’ weaknesses.
– The adventures provide you thousands of upgradable items (weapons, armors, accessories); use miraculous artifacts to make them stronger!
– Action and story-telling both play vital roles during achieving quests and puzzles.
– Fight in real-time combats for fabulous loots, magical items and otherworldly abilities!
– Learn plenty of devastating, protective or remedial spells & skills, and master the status effects for advance!
– Roam around the fantasy realm, follow your insight, and keep an observing attitude – the help would arise sometimes by surprising sources to solve the riddles and puzzles – don’t leave a path unexplored!
– Discover other wanderers traces; talk and trade with NPC’s through your quests; search for meaningful hints to find out the puzzles.
– Envision the fairy past by the haunting memories of the fallen heroes! Find the scrolls of Harten and Aesthirya to unearth legendary episodes from the greatest empires’ history.
– Be aware of the crafty & deadly traps!
– Experiment the wonder of Magic Forge: make powerful potions, craft epic, legendary or even relic items, and enchant your gear!
– Dive into the challenge of Arcane Dungeon’s grim labyrinth for marvelous treasures, when the hallowed Moons let you enter!
– Try your luck: dicey deals await you with the vendor of the bewitched chests.

– is an offline playable rpg – except in those understandable cases when you would like to update, make an ingame-transaction, or keep the leaderboard up to the minute.
– is truly free to play.
– is completely ad-free.
– show the world from a first-person perspective with 90° turns and movement spaces, also known as grid-based system.

I believe we don’t have to say farewells to the gems of classical dungeon crawlers and roguelikes even in our dynamic (sometimes hectic) world – and I try my best to deliver their spirit and charm with utilizing today’s possibilities. I’m a great fan of role-playing games like the Eye of the Beholder, Might & Magic and Dungeon Master, and these great classics added the creative spark for setting this personal challenge up.

Being an indie developer’s dream, Moonshades is permanently shaping and growing with the aim of reviving the joy of these memorable RPGs on mobile devices. There are myriad of outlines about quests, puzzles and various adventures for this RPG what I would love to share with you. To avoid such a common mistake like becoming narrow-minded to personally favourites or missed the target on my way, I’m always open to your views and ideas!

Step into the teleport, and have a lots of fun in this nostalgic fantasy!
– The Creepy Messenger
– Rewards in Arcane dungeons scales to player level
– Boxes can be opened with a double tap
– Ability fixes
– Bugfixes