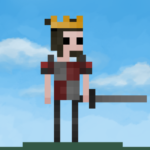 Explore the world, collect useful items, armors, helmets, cloaks and more!
Be careful, when traveling the world! Bandits, peasants, lumberjacks, armies of knights are everywhere around the island, hoping for finding you, getting into battle with you and receiving as much your gold as possible.

Goal is to recharge all the villages on the island. Once you win battle against village defenders, village become yours and you can rename it, recruit soldiers there, get taxes from you citizens, build more houses and change tax rations.

Enemies sometimes drop poachers with gold, but can contain armors and helmets aswell!

Incredible graphics, tightened to the smallest detail!
(Including dynamic lighting, sophisticated fog and shadows)
Even if your device is not the most powerful one, for you I’ve got something special. Graphics level can be modified in options! 🙂

You can recruit up to 7 types of units and get them fight at your side!

There is no army limit! Fight battles you ever wanted!

Every battle is very unique and addictive!
Make sure you are able to stop enjoying battles!
Have fun 🙂
minor design changes
bug fixes