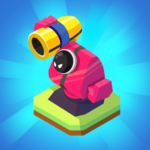 It’s all hands on deck in Merge Tower Bots – the first EVER merge game, defense game, and idle game in ONE!

The Ultimate Merge Game
Upgrade your defense Robots by merging them! It’s as simple as select, drag and – merge!

Watch as your robots level up and become powerful defenders before your very eyes, and get exciting new powers to crush bosses and attackers!

The Ultimate Tower Defense Game
Build your tower and protect your gold – then watch as monsters try to destroy everything you’ve built! This tower defense game takes clicker games to a whole new level!

Merge and set up your robots to protect what’s yours – and let them rip…all over your tower’s attackers!

The Ultimate Idle Game
Once you’ve set up your defenses, you can sit back, relax and go about your day, knowing that your robots are working hard to defend your land- but remember to check back often for upgrades, gifts and other goodies!

Get Merging to Protect Your Land!
Merge Tower Bots is the coolest new idle clicker game out there!

Combining all the greatness of defense games, merge games and idle games, this is one exciting free game you’ll love to play!

The longer you play, the greater the rewards – every time you take a break and return to Merge Tower Bots, you’ll receive coins to spend on cool upgrades and new defenses!
Upgrade your defenders by merging or using coins: get the best defense you can – just merge to upgrade your defense robots, or buy upgrades!
Major update!
* New locations
* New bosses
* Robot upgrades