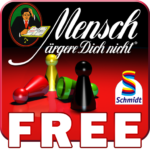 The original mobile version of the popular German board game from Schmidt Spiele is now better than ever! Mensch Šrgere Dich nicht! has been in the hearts of fans Ð both old and young – for almost a hundred years.

This new and improved multiplayer fun is exactly like you remember it from the evenings spent with your family at home! Gather around your device and have a nice board game session anytime, anywhere! This is how digital board games should look like today!

Players will enjoy the unique way of rolling the dice: just shake the device or swipe the die just like the real one and cross your fingers!

Whether you are playing against your friends or the clever artificial intelligence, this is Mensch Šrgere Dich nicht at its best!

Features:
– real board game atmosphere for you and your friends gathered around the device,
– original Schmidt Spiele game board and pawns,
– customizable rules,
– multiplayer fun for 1-4 on one device,
– smart computer opponents,
– roll the die by using the motion sensor of your device.

In the 1950s classic film “Wonderful Times”, actor Heinz RŸhmann described Mensch Šrgere Dich nicht! as a wise and educational game, which teaches players how to be good losers.” And he was right. In 1987, the Spiegel news magazine declared it “the nation’s most popular game”, which was easy to believe given its sales of over 100 million copies. For over 100 years the dice game has been a source of fun and annoyance for players across Germany. And it is this very combination that has made Mensch Šrgere Dich nicht! THE mother of all games. There are now various different versions of the original, which for its part remains almost unchanged, because even now, the simplicity of the design clearly represents the values of the game.

History:
The triumph of this famous best-seller began 1914 in the trenches of World War I. The game with the colorful wooden skittles was taken to the battlefields from the military hospitals to which Josef Friedrich Schmidt donated 3,000 first edition copies. When German soldiers returned home at the end of the war, many did not only bring a knapsack of memories, but also Mensch Šrgere Dich nicht! (Don’t stress about it!). With its rules that allow for getting ahead, blocking opponents and mercilessly casting their counters off the board, the game quickly became source of fun family entertainment up and down the country.

This was all much to the joy of Josef Friedrich Schmidt, who was becoming the highly regarded owner of a small games company. Just two years after the end of World War I, the somewhat sullen looking man was staring into the living rooms of Germans from more than a million red game boxes. To date, the company has sold over 100 million copies of what for many is the ultimate board game, and so often an addictive introduction into the pleasurable world of game playing.