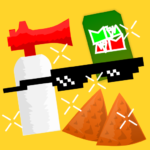 The PRO version of this app, with more memes, functions and with no ads has been released. ‘Meme Sound board PRO 2018’.

This dank meme sound board was created with your suggestions in mind. If there’s a sound you’d like to be added to the soundboard, send a tweet! (@Meme Sound board). It’s as easy as that and it’ll most likely get added in the next update.
New sounds!