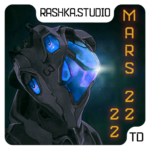 Mars 2222 – a unique 2D offline strategy for tower defense tds, in which it is necessary to build and upgrade towers and weapons to fight against the alien on the planet Mars.

The strategy has an interesting linear storyline, where under your command guns, equipment and robots. Show your tactical skills, upgrade weapons with intelligence and fight with aliens for the resources of the planet Mars.

You are a young commander who was sent on an important mission to colonize the planet Mars and the collection of valuable resources. You have to manage a powerful and huge tower, build and upgrade defensive towers to protect the base from the aliens, explore the terrain of Mars to search for artifacts and resources and fight the Bosses. The company in the game will make a funny robot R-7, with which you have to explore the planet Mars.

Mars 2222 does not require a permanent Internet connection.

¤ Important ¤
± Mars 2222 is a Tower Defense game with a well-designed tactical game system. To survive, it is necessary during the game to carefully allocate resources and time for attack or defense. Think about what you need to buy or upgrade, this greatly affects the game balance of the game.
± For the first mission, you must kill monsters only from the main cannon and use chemical weapons. If you build additional turrets, then the energy will not have time to recover, which will lead to defeat.

¤ Plot ¤
After long unsuccessful attempts by American scientists to send their expedition to Mars, the Russians managed to build a space orbital station and send it to Mars. The purpose of the mission was simple – to thoroughly study the planet for the possibility of life of earthlings on it and to extract valuable resources, since The earth is already dying. In 2222 the Russian interorbital spacecraft approached the orbit of Mars. Scientists land safely on the surface of Mars and begin to extract resources. Suddenly out of the ground began to climb out the aliens, who were hostile.

¤ Combat system ¤
≡ 32 types of towers, divided into 4 types of machine guns, grenade launchers, rockets and lasers, with the possibility of upgrading.
≡ 3 types of chemical weapons with the possibility of an upgrade.
≡ More than 30 kinds of enemies each with their own strengths and weaknesses.
≡ Invincible bosses with unique abilities and skills.
≡ An interesting and exciting linear story with the player’s participation for more than 60 missions.
≡ Each choice made in the story affects the gameplay of the game.

¤ It is interesting ¤
≡ Non-renewable resources, as in real life.
≡ With a new region enemies become bigger and more dangerous.
≡ Multiple ways to attack enemies – different scenarios of defense base.
≡ Random appearance of enemies – you never know where and what enemy to appear.

ATTENTION! Mars 2222 can be downloaded and played for free in offline mode. Some game elements can be purchased for real money or for viewing an advertising video.

¤ Support ¤
Problems with the game or have interesting ideas? Write to support@rashka.studio.
Optimization ?