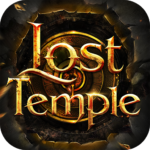 【Lost Temple: The Most Intriguing and Thrilling Tomb-Raiding Themed Mobile 3D MMORPG】
【Venture at your own risk!】
【Robbed and Raided.Rags to Riches】
In Lost Temple, you play as a treasure hunter who explores ancient crypts, solve puzzles, and summon powerful mystic pets! You can sell various antiques in the black market, and battle against raiders from around the world in Dragon Ridge!
Gear up, grab your friends, and set off on a mysterious underground adventure!

Features
【Three Diverse Classes at Your Disposal】
Every class has its own unique skillset: The Gunslinger, a knowledgeable fighter well-versed in geomancy; The Assassin, the expert zombie slayer; and The Warrior, an ultimate brute martial artist. It’s a matter of life and death within the catacombs, but with the temptation of riches and treasures, betrayal lurks around the corner…
【Mystic Pets Mighty Companions】
Legend has it that a member of the Khmer nobility hid his vast fortune within his tomb. It is still left uncovered and waiting to be revealed. In Lost Temple, you can use compasses to navigate uncharted tombs, summon pets to slay enemies, and collect the treasures deep within.
【Black Market Strike Rich Fast】
Are you still envious of the wealth of others? Strike it rich by collecting antiques and sell them in the black market!
【Duel of Elites Decide who’s Best】
So long as there are men, there will be wars. Access PVP in a cross-server arena to fight against raiders around the world. Join Dragon Ridge to claim all treasures and become a legend.
New Version