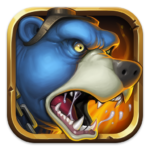 Little Lords of Twilight is a visually stunning turn-based RPG, where players from around the world duel in real-time 1v1 battles.

— FEATURES–
• Battle players from around the world in 1v1 duels
• Collect and upgrade cards to build your winning deck
• Unique day/night transformation system where heroes’ appearance, stats, and abilities change as day turns into night during battle
• Join a clan and dominate the global leaderboards
• Earn chests to unlock rewards, collect new cards and upgrade existing ones
• Unlock new hero abilities and skins
• Choose which heroes and hirelings to bring with you into battle
• Collect shards during battle to unlock the highly coveted eclipse chest
• Work together with your clan to open the valuable clan chests
• Create your strategy to win in this highly tactical turn-based RPG

Little Lords of Twilight is free to download and play, however some game items can also be purchased for real money. If you don’t want to use this feature, please disable in-app purchases in your device’s settings.
The synchronization problem caused by maximum card upgrades has been corrected