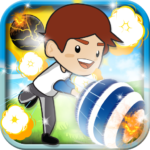 “Let’s BOMB!!” is the free online action game.
Players are divided into two teams and lets them throw a bomb falling into the field to the base of the partner and blow it up.

[summary]
Score is provided when you throw a bomb on a base and the enemy player.
In addition, there is HP in the base, and a base collapses when it becomes 0.
When a base collapsed, a team having high score becomes the victory.

[NPCs comes up]
NPCs equipped AI appears.
Even if there are few numbers of people in the room, you can enjoy it.

[Outbreak of the event]
By an event to occur in random during play, war situation fluctuates.

Let’s ‘BOMB’ enemies in cooperation with a friend!
Changed player movement method.
By changing the menu settings, you can play with the conventional operation.