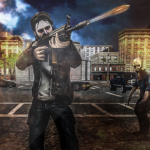 You don’t need to imagine anything while playing this game. You will automatically start feeling like you are in some apocalypse of the zombie land. Filled with adventure and threats; Last Survival – City of Living Dead is a ride of action and thrill. In this left for survive zombie games, you will be allowed to choose the modes to play whatever you like. Last Survival – City of Living Dead is Offline game for the players who are unable to be online all the time.

Presented with undead carnage fight to survive till end, you can select the objective mode to complete the mission. The city is taken over by the ruthless zombie and left behind a hero to as savior now it is your job to play the role of peacemaker for the city. The scary night and rain cannot stop you to kill the unkilled. The fight should end until you survive the dark of dead rising. Last Survival – City of Living Dead is the top zombie strategy game.

When the dead zombies strike you have to survive till the end. In the second mode, your job is to take the position and shot dead zombie as fast as you can or alive for daylight. This might feel like war of dead battle where you are unaware of what will happen the next moment. When digging deep in the game the excellent gameplay and story will tell the player that he is one-man army into the zombie warfare.

The most exciting and full of action mode is the third one where the endless battle between you and zombies start in this zombie killing game. Stay alive until the killing spree arrives at the point where the zombie crisis begins. As you move further in game by killing zombies the dead zombies will be disappeared.

Some of the main features of this game are:
•Large realistic city arena to move around while killing ruthless zombies’ enemy.
• Powerful shooting weapons – rifles, shotgun, pistols, melee and more.
•Three different style of game play – free to play all of them at anytime and anywhere.
•Play endless zombies war to earn highest rewards.
•Use the rewards to unlock new weapons.
-Graphic update