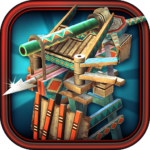 Tower Defense vs Zombies: Join the ongoing war, in an open world, against the zombie horde, scavenging raiders and other threats roaming the wasteland! Choose between the best and most powerful heroes in the world all with unique epic gear and skills! With the wide variety of weapons you can create your own perfect strategy. Enjoy a visually stunning tower defense game in full 3D!

Awesome Features
– Over 140 levels which will challenge your strategy. Find the reason behind the zombie invasion, take out the raider leader scavenging the land or fight in the arena for coins and glory!
– 8 Special Heroes to choose between, the precious Princess, mighty Barbarian, mysterious Scout, gun crazy Mechanic, support Soldier, Mechwarrior, experimenting Scientist or the righteous Sheriff.
– 12 Different turrets for your tower defense, each with a unique research tree to make them even more powerful! Pierce the zombies with arrows from an Arrow Turret, blow them to pieces with a Mortar Bombs or electrify them with a Tesla Coil.
– 50+ types of enemies to encounter while exploring the wasteland. If that’s not enough, go up against 5 Boss monsters that are scattered across the map waiting to rush you!
– Mighty Hero skills and Epic god skills, destroy the undead with one heavenly strike or shake the zombies by moving the earth.
– Monster Tome, useful for finding your enemies weaknesses!
– Many hours of tower defense gameplay including ingame Achievements with rewards and also unique rewards for completing levels and different challenges.
– Three different difficulty settings: Normal, Hard & Nightmare! Challenge yourself and earn extra coins and XP by doing so! Good Luck!
– Endless mode, Time to show the world who is the greatest and has the strongest hero.
–Works offline. No internet connection is required to play.

Experience the best Tower Defense, better than anything you’ve seen before! Download this fun free game now and get ready for some intense battlefields and epic boss battles!
Bug fixes