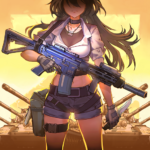 Zombies and evil forces are coming in endlessly! You will be the last guardian of the world, join Zgirls League, and fight with blood! Rebuild our home and dominate the world!

Background
It’s been 3 years since Zgirls has been fighting against zombies. Zgirls has mastered a vast amount of advanced military technologies. However, terrorists controlled upgraded zombies and invaded Zgirls bases. The bases got compromised while they were under loose defense. Now, you commanders will lead Zgirls fight with decisive organizations. Build your own military empire, conduct all kinds of army, and rebuild the world order until to be the new leader!

Features
– Zombies are everywhere, enemies are approaching, and the world has come to the end. Commander, are you ready?

– Unique anime military art style, world military buildup such as United States, Russia, Poland, they all follow your lead and fight for you!

– Epic real-time PVP and co-op battles, compete with thousands of players online from all over the world!

– Collect and train numerous Zgirls to be your battlefield killers

– Create alliances, searching allies, mutual business strategies, and conquering the world.
[ADD]Cross-State Battle Royle The second season is about to begin, 3 orange heroes are about to join the battle
[Optimization]Optimize the appointment of the official entrance, you can jump in the player details interface
[Optimization]Dynamic performance of scientific research