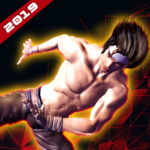 You need to fight in order to survive and save the city from criminals. Fight to finish the crime on the streets or get finished by city gangsters. Be the kung-fu fighter king in this karate action game. Fight for justice for poor and needy, fight to be the legendary fighter, fight to be a real warrior superhero, prepare your fist for fury, and fight until you win the battle. In this Kung Fu street Fighting Game, the player’s character is a martial art champion that practices his family’s Kung Fu legacy and fighting style against dangerous city gangster and street rookies. The city of the gangster is becoming more powerful in the local streets. You fight as best ninja kung-fu superhero to clean the city streets from gangsters and criminals. Perform unpredictable and sudden iron shuriken attacks on enemies. Show your special moves such as kickboxing, karate, kungfu and throwing the shuriken on gangsters perfectly to end up these criminal gangs.

City streets are unsafe for everyone. Be a brutal street kung fu ninja warrior and keep the innocent people safe. Smash, kick, bust and slash the petty criminals and city gangsters. You have to be a real fighter as the crime, atrocity and corruption are growing in the city. Innocent people are living in fear of being mugged, killed, beaten or looted but you, as a Kung Fu fighter and Ninja master warrior is a ray of hope for oppressed and wronged innocent citizens. Although you have a legacy t o follow but you have to fight the street crime. The game is designed in the form of street crime movie which has criminals appearing one after the other.

Fight using a variety of punches, combos and throwing shuriken. The player chooses own character at first from different characters. Then the player selects the mission from ten different missions by completing one mission the other one unlocks automatically. The missions are tough, challenging and exciting to complete. Show your great kungfu skills to become the grandmaster kung fu champion. The enemy’s characters are dangerous underworld tycoons ruling the underworld and now they are spreading their terrors in city streets. Keep your fighter strong in this learn to fight ninja warrior fighting game because the enemy count will increase in each level. Prove your ultimate street fighting skills and bring this assorted mortal kung fu combat fight to an end. Get incredible super abilities to become an absolute champion in combat games 2020.