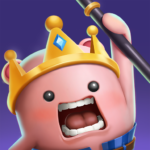 “The game takes place in a mysterious royal world where the local inhabitants are known as “Doods”. The Doods summon humans and monsters from other realms into their own world. The King Dood grants them magical powers to turn them into warriors and have them siege other Kingdoms on his behalf. Think twice about calling this Dood cute when you see him clash and command from his royal throne!

You are the King’s General, build your own royale castle, form your strategy, raid other kingdoms. Your mission is to collect and train heroes, on a conquest in a worldwide epic PvP arena, and bring your empire to reach the top leagues!

Kingdom Raids is a mixture of a brand new tower defense (TD) and classic RPG. This game with an idle touch will take you on a journey, build castles, unlock heroes, win battles, collect stars, earn chests, and crush all rivals! Summon over 100 mighty heroes with unique abilities of Dark, Light, Earth, Water, and Fire, train the most powerful army and fight for glory. You will lead your own champions. Most of the people play AFK to pass the time, but in Kingdom Raids, you play to win. Don’t forget to build your empire, join clans and defend the invasion from other lords. What’s next? Take the magic and start your adventure now!

FEATURES
– Collect legendary mighty heroes. Level up, tier up to get stronger and form a dream team
– Prepare your ultimate strategy, design your castle, build and upgrade your towers, plant traps. Get ready for fierce PvP battles and defeat all enemies
– Raid other kingdoms all around the world and take their trophies, earn chests to unlock tremendous rewards”
– Added New Dungeons
– Improved Events
– Optimized performance