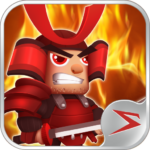 ★★ Kingdom Defense: Castle War TD – the newest and most attractive strategy game in 2018 ★★

Yun – the ancient land under the reign of the talented warlord No has had the years of prosperity and peace-loving. However because of this reason as well, there are lots of dark powers would like to invade this prosperous land.

The league of darkness attacked and destroyed everything on the way they move, and people of Jun only have the last castle – Yunia. You as the warlord No have to evolve the castle, build your army to defense from the cruel enemy.

Kingdom Defense: Castle War TD is a featured game in the tower defense td games genre. With the new and special game play, this game will bring to you the interesting and entertaining moments.

Let’s grow the castle, arrange the heroes, defense towers, recruit the archers to fight against the bloodthirsty and good fight army (including zombies, robots, flame dragons, werewolves, skeletons, cutie slimes…). In defense tower wars, the intense battle to protect Yun castle will happen continuously and the power of enemy will increase unceasing.

Let’s create the best tactic to save and develop the castle to become the legendary defender with Kingdom Defense: Castle War TD.

You love the strategy games genre and the tower defense TD games? The most amazing experiences are waiting for you in Kingdom Defense: Castle War TD!

– Infinite number of levels and waves: the number of enemies who would like to come over the wonderful Yun land is increasing, the attack waves is more and more dangerous. You must not lose the last castle in this battle. Let’s develop it and your army to save this land and your people.

– Special skills system: in Kingdom Defense: Castle War TD, you will own 9 skills that help you rise the strength and speed of archers, heroes and level up your EXP and gold you can get, so that you can beat the enemies in this defense war.

– The defense towers are arranged around the castle to make the special effects such as to increase your EXP, freeze enemies to slow them or make more gold for you.

Amazing missions and rewards for Defenders
– Let’s try to complete the missions in game to collect gold and gems then you can use them to evolve the castle and increase your army’s power in the castle defense battle.

– If you have the special achievements, you will be honored on the leaderboard with so many great awards reserved for the legendary defender.