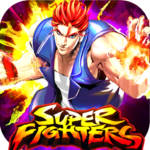 King of Fighting: Super Fighters is a classic super hero fighting games.
King of Fighting: Super Fighters combines boxing, karate,kungfu, wrestling,latest arcade games totally free!endless fighting action a new style ARPG is coming!
The true heroes are born in the street fighting, feel the power and strength in your hands, wielding a real fighting machine.It’s your time to be the master of kungfu fighters for FREE! Choose your favorite character and compete in street fights, do not let them reach your opponent to avoid a KO.

Come swing your fists in this all-immersive mobile boxing game.simple side-scrolling interface and easy-to-learn controls, as well as a wide range of skills you can mix for devastating combos. An unprecedented brave combat experience!Fight on the street! Face varies of enemies! Defeat them and take all their territories!Use quick reflexes and special moves, unleash fierce punches and combos, beat all opponents and become the king of boxing now!