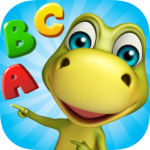 This game is suitable for preschoolers and the little kids for learning letters, numbers and other basics.

“Kids Garden” is a very rich, funny and education game for kids and adults with over than 200 puzzles of:
✔ Letters and numbers: A-Z letters with sounds & 0-9 numbers
✔ Animals and birds: 36 animals and birds with their names and sounds
✔ Vegetables and fruits: 36 vegetables & fruits with names of the fruits/vegetables
✔ Transport: 36 colorful vehicles
✔ Dinosaurs: 36 colorful dino images with their names and sounds
✔ Children in motion: 36 motions of children.

We, at Forqan Smart Tech, have always sought to provide the best for your children through applications designed, and directed each age group separately, our belief in the feature each evolutionary stage passes by your son, but in order to lend life skills and the mentality to learn and grow and play correctly and properly, and to communicate with his peers and the environment surrounding it.

This app is for kids who want to learn basics of 11 languages: animals, letters, numbers, vegetables and more.
Bug fixes.

Idle Champions of the Forgotten Realms 1.141