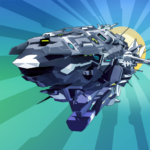 Battle with friends or solo across planets and galaxies. Unlock and upgrade unique spaceships and customize them with powerful modules. Make each battleship your very own and show off your space fleet with your chosen hull skins, color paintings and customizations.

Some say nobody has what it takes to rule Iron Space. Maybe they just haven’t found the right allies. So start a Team Battle and engage in real-time 4v4 encounters. Make yourself a winning team.

Otherwise, go with Solo Deathmatch as you fight your own way against the rest of the world. Defeat them all and the honor is yours.

Surprise yourself with even more battle modes from time to time.

NO TWO BATTLESHIPS ARE THE SAME, NO TWO COMMANDERS ARE EQUAL

Start humbly with the approachable Valkyrie, a balanced Assault Battleship wielded with super-fast Doubleshock Cannons and Dual Flak Spreaded Shots, supported by an Auto-AIM Missile system and equipped with the Weapon Amplifier Super-Tech that would further enhance any damages dealt to enemies.

You would go on and battle your way through to unlock spaceships more Rare and Epic, with sophisticated technologies and weaponry to suit a vast variety of battle tactics. Ones with an extremely long range of attack, ones with unparalleled agility and stealthiness and even ones with virtually impenetrable armor strength. Master not only those laser, cannon and missile turrets on your ship but also each extreme Super-Tech that comes unique on every single one of them. Cloak your spacecraft into invisibility or propel it to invincibility.

Further customize each spacecraft with a whole new Hull, Bridge, Armament and Engine, each boosting certain ship abilities. Mix and match with different module combinations and find yourself the winning formula for your preferred battle strategy.

Beyond fleets of space corvettes, frigates, destroyers, cruisers and dreadnoughts in a galaxy on fire comes a whole new definition of real-time multiplayer online space combat war game. Mind you, these are no ordinary warships. These are unique yet customizable space battleships every planet commander has ever hoped for.

In Iron Space, not even the sky is the limit.

– Battle against players from around the world in real-time and take their Trophies
– Earn Containers of Reward, collect powerful new battleships and modules and upgrade existing ones
– Defeat enemies and win battles to earn Epic Mission Rewards
– Formulate your very own battle tactics with each ship’s unique attributes, weapons, modules and Super-Tech
– Customize your battleships with unique Hull, Bridge, Armament and Engine modules, each boosting the ship with different upgrade aspects
– Design your own ship with customized modules, color painting, ship skins and more; make your fleet unique across the galaxy
– Awesome mobile space game of the sci-fi genre with state-of-the-art 3D graphics
– Exciting & action-packed space battles that value both skills and tactics
– Multiplayer PvP space shooter completely FREE to play
– 2 different battle control systems, pick what you’re most comfortable with
– Help & support channel available in-game under settings / support