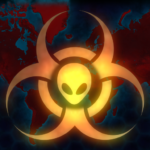 ‘Invaders Inc. – Alien Plague FREE’ is a fun and fast-paced strategy simulation game where you take control of an alien invasion against planet Earth. Lead your invaders to victory and wipe out the human race!

Choose from ‘real’ alien races commonly believed to visit earth – including Greys, Reptilians and Insectoids. Each race has their own strengths and weaknesses making for challenging gameplay. Conquer the globe to unlock new alien races.

Harvest natural resources from the Earth and use them to upgrade your spaceships, evolve your aliens and produce weapons of war.

– Three levels of difficulty: Easy, Normal and Hard.
– Three alien races: Greys, Reptilians and Insectoids.
– Evolve your aliens to increase their chances of success and to boost their resistance to deadly virus, bacteria and pathogens.
– Upgrade your spaceships ready for battle.
– Produce powerful weapons of war to give you an advantage over the earthlings.

SYSTEM REQUIREMENTS:
It is recommended that ‘Invaders Inc. – Alien Plague’ is played on a newer phone with at least 512mb of RAM.
The game may not run on older devices.