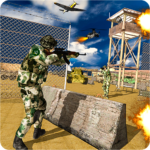 Enemy have envaded your territory with their ruthless ceasefire voilation attack. You have to strike back and encounter the enemy with your best IGI commando combat team. Be a battle hero for your soldiers in offline war with Indo-Pak in the border attack WW2. In this Indo-Pak Ceasefire:IGI Combat Mission WW2 game your duty is to eliminate all elite killer of enemy and damage them with deadly strike in kashmir. Best free army game,enemy strike 3D game for surgical strike in the battleground of kashmir LOC mission. This is glorious ceasefire voilation game with modern warzone rules. This is a PvP mode type offline army game where you have to defend your nation and attack your enemy with SSG and trained gorillas who are ready for your follow up in modern gun shooter IGI war competition WW2 free action game.

Lead from the front to tackle enemy attack and guide your soldiers to encounter them because you are the leader of the pack. You are the best sniper,assault shooter and modern trained commando in this Indo-Pak Ceasefire:IGI Combat Mission WW2 game. Use modern weapons like modified shot guns,sniper rifles, assault shooting guns,AK47,M416, pistols and grenades etc.

You are the best army game commando so you have to fight for your nation to maintain freedom in this WW2 gunship battle IGI. Shoot them all with your skilled combat team and well trained commando sniper shooters. If you get damage from the enemy you can use medical kits provided by your secret mission agent in the enemy place.

What are you waiting for? Free download Indo-Pak Ceasefire:IGI Combat Mission WW2 game and don’t forget to give us your precious feedback.