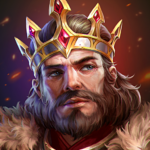 Battle against players from around the world in the brand-new mobile strategy title Honor of Thrones.

Unique gameplay: build freely in a massive world and choose from the myriad races that share this world.
Battle against players from around the world on the same server. Offense or defense, cooperation or conflict, prosperity or destruction – the choice is yours. Use strength and wisdom to sweep aside the enemies on your path of glory, and discover the wonders of the world.

Work with or against players from around the world

Battle against players from around the world on the same server. Fight over powerful fortresses and valuable resources, build a prosperous and formidable city, and earn rewards by eliminating rebel camps, monster dens and portal defenders.

Build towers on your territory to defend against enemy attacks, or forward bases to facilitate your own assaults. Your path to the throne is yours to pave.

Legendary heroes walk the world of Honor of Thrones, each with unique and powerful abilities. Leniras the Elven Prince, Nenya the Windspeaker, Bronze Beard the Dwarven King, Korin the Grand Magus, Fafnir the Sage Dragon – will you earn the loyalty of these famous heroes, each one beautifully modelled with their own unique appearance, rich backstory and impressive skills? Build your own unique army, and write your own legendary saga.

Play to your race’s strengths

※Contains animated violence with no gore.
※Honor of Thrones is free-to-play with in-app purchases available through the in-game store.
※Remember to take an occasional break during long gaming sessions!
Optimizations:
Fixed various bugs!